Took a Cruze and returned a Commodore 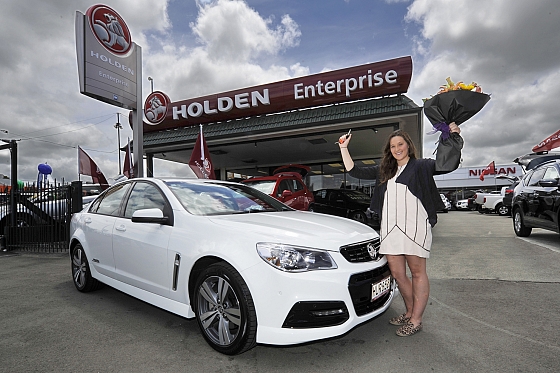 24 December 2014 – When a Gisborne dad bought his daughter a Holden Cruze in last month, he could hardly have expected her to hand him a brand new top-of-the-line V8 in return.

But that is exactly what second-year law and management student Sarah Cranswick did when she found she was one of the six winners in the promotional draw to celebrate 60 years of Holden cars in New Zealand.

Miss Cranswick was entered into the draw after she took delivery of the Cruze. Up for grabs were six models of Holden – Barina, Trax, Captiva, Colorado, Cruze and Commodore.

“The Commodore is one of the top of the range among the prize cars,” said Enterprise new vehicles manager Steven Shields.

“The competition was nationwide so it is good that Gisborne has a winner.”

– Picture and content by Paul Rickard from Gisborne Herald

Get the right car for you, with a payment that fits your budget! Our vehicle finance is fast, easy and friendly. At Enterprise, people make the decision - not a computer!

Why walk to your letterbox to get our weekly specials from the paper, when we can send them straight to your inbox. Sign up below:

Not sure what you can afford? Work out your weekly budget using our handy calculator.

We pride ourselves on good customer care and service but don't just take our word for this.

You can book your next service directly from this website. Don't waste time, book today!

We supply genuine Holden & Nissan parts for all makes and models, order today.